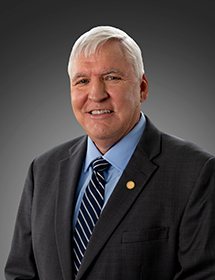 David J. Cole, MD, FACS, originally joined MUSC in 1994 and has served in numerous institutional and national leadership positions leading up to his appointment as president of MUSC in 2014. These included serving as chairman of the MUSC Department of Surgery, president of MUSC Physicians, president of the Southeastern Surgical Congress, and a member of an NIH study section for over a decade. In addition to his clinical expertise as a nationally recognized surgical oncologist, Dr. Cole brings a strong tumor immunology research background. With more than 17 years of continuous funding by the NIH, he initiated and helped to build MUSC’s highly regarded immunology research program.

A native of New Mexico, Dr. Cole attended New Mexico State University, was a Rhodes scholarship finalist, and earned his medical degree from Weill Cornell Medicine in New York City, New York. He completed his surgical residency at Emory University affiliated hospitals in Atlanta, Georgia, and his fellowship in surgical oncology at the NIH and National Cancer Institute in Bethesda, Maryland.